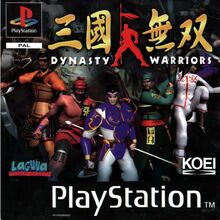 Dynasty Warriors (三國無双) is a weapon-based fighting game developed and published by Koei. It was released in 1997 for the Sony PlayStation. This game was a fighting game, whereas the later installments in the series were hack and slash games.

Retrieved from "https://threekingdoms.wikia.org/wiki/Dynasty_Warriors?oldid=37890"
Community content is available under CC-BY-SA unless otherwise noted.